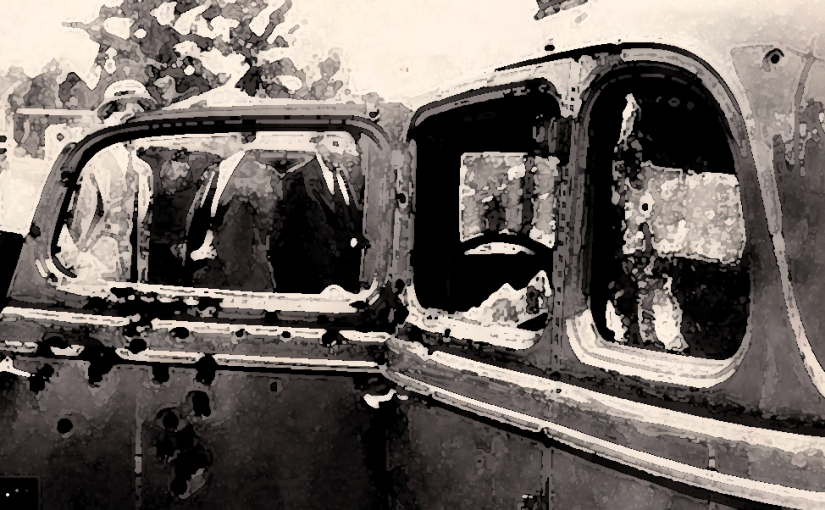 Clyde Barrow and Bonnie Parker captured the imagination of Depression era America.  Although their actual success at crime was a far cry from the myth, people were starving to be distracted from the dire reality of the dust bowl and economic devastation.

For about three years, 1931-1934, the “Barrow Gang” traveled Texas, Oklahoma and Missouri attempting to rob banks but more often small grocery stores or filling stations.  Clyde was blamed for murders he didn’t commit. Criminal masterminds they were not, but the newspapers built them up into larger-than-life characters; publishing photographs of the couple that had been found at an abandoned hideout.

The portrayal in the press of Bonnie and Clyde was sometimes at odds with the reality of their life on the road, especially for Bonnie Parker. She was present at 100 or more felonies during the two years that she was Barrow’s companion, although she was not the cigar-smoking, machine gun-wielding killer depicted in the newspapers, newsreels, and pulp detective magazines of the day.

In May 1934 Frank Hamer, a legendary Texas Ranger, assembled a well-armed posse around Gibsland, Louisiana on Louisiana SR 154, not far from US 80, and they put over a hundred slugs into their bodies, bringing an end to their short but exciting run.

He grew up a poor boy in Texas
A little smarter than the rest, and restless
He looked around and didn’t see no justice
The cards were stacked against a poor man
Told himself he’d not be poor again

He stole cars and robbed grocery stores
Then bigger crimes that could not be ignored
Killed a lawman, when they sent him down he swore
They’d never take him alive again
He’d die before he went back to the pen

© 2019 Frank David Leone, Jr./Highway 80 Music (ASCAP). The songs and stories on the Highway 80 Stories website are works of fiction. Names, characters, businesses, places, events, locales, and incidents are either the products of the author’s imagination or used in a fictitious manner. Any resemblance to actual persons, living or dead, or actual events is purely coincidental.

Jed Phelps describes life after his Pa died:  His sister Nellie marries a Texas rancher who brings them all to his ranch and puts sixteen year old Jed to work.  However, after a few years Jed doesn’t take to ranchin’.  He’d heard heroic stories about the Texas Rangers and joins up.  When that isn’t all he dreamed it’d be, he decides to go back to their farm in Tennessee only to find something less than he expected.

Things won’t be how you remember
The truth ain’ what you want to hear
Leave the past behind you, it’s better
Than seein’ what’s waitin’ there

I found the block where I split wood
The barn was all but fallin’ down
Squattin’ on my heels, chewin’ a cheroot
Thinkin’ how Pa had been so proud

Things won’t be how you remember …

Went around back, found th’ graves
Cleaned them up as the sun sank down
A part of me wished I had stayed
But back then I couldn’t wait to get out

By the time Jed was six he’d lost his older brother Burch and his mother.  Ten years later his father died leaving his sister and him alone on the family farm in Tennessee (see song “I Didn’t Know What Else to Do“).  Nellie married Robert Dorsey the son of a wealthy Texas rancher when she was 17, in 1873.  Dorsey brought Nellie and Jed with him back to his family’s Texas ranch, which was rather large.  Dorsey land stretched between what would become the future cities of Monahans and Abilene.

Abilene was established by cattlemen such as Charles Dorsey, Bob’s father, as a stock shipping point on the Texas and Pacific Railway in 1881. Monahans grew up around a deep water well dug a few years later when the railroad surveyors discovered that the lack of water for the laying crew and their animals would slow down construction of the rail.  Monahans’ digging of a water well produced an abundance of good water and the town would thrive.

Jed was a disgruntled young man, at sixteen he didn’t much like being bossed around by Bob Dorsey.  Having an active imagination Jed dreamed of joining the Texas Rangers whose fame of heroic deeds fighting the Indians and Mexicans he’d heard all about in the bunkhouse.  And so, that’s what he did as soon as he turned nineteen.

But by then the Indians had been run off and the Mexicans no longer posed much of a threat.  Mainly the Rangers were a mercenary band supporting the ranchers whose barbed wire fences were an obstacle for the old cattle drovers accustomed to driving their herds north unobstructed.

There had been a fence war raging between the cattlemen taking large herds across Texas to places like Kansas City and the ranchers who tried to preserve the integrity of their ranches.  This conflict eventually petered out when the railroad was completed since it made no sense to drive the herds north when they could much easier be loaded onto a train.

Disenchanted with this life, in 1888 Jed decided to return to Tennessee and the family  farm to see what was there.  More disappointment awaited him, and so he rode off again, never to be heard from again (see song “A Rusted Plow“).